The new small mains transformer LL2758 was designed in cooperation with Claus Byrith, for many years the head of the studio at the Royal Academy of Music in Aarhus. We have asked Claus to introduce the LL2758 transformer: 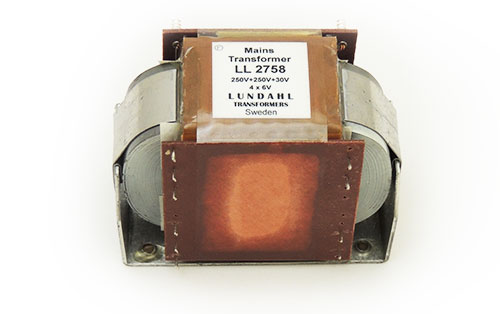 ”The new mains transformer LL2758 is designed with the serious valve oriented audio enthusiast in mind.
Its versatility offers a big number of possibilities. The two 250Volts secondaries are completely separated, permitting two independent supplies with two bridge rectifiers or a one valve rectified supply, capable of the double current. Each of the four 6V heater supplies are sufficient to supply e. g. two of the most popular and stable EL84 valves. That means that the transformer can supply a stereo amplifier, each side with 2 EL84s in Class A, either as two completely separated circuits or with valve rectification as a normal stereo amplifier. The two 6V secondaries not used for the amplifier valves can supply either preamp valves or the rectifier valve (6Volts is chosen to allow for the use of e. g. the EZ81. if a 5 Volts 2Amp valve, such as the GZ34 is used, a series resistor of 0.47 Ohms will be needed). Two 6Volts secondaries can be series connected allowing for rectification of heater supply for hum sensitive valves handling small signals as for example in RIAA or microphone amplifiers, ensuring that a fully stabilized 6Volts DC can be achieved.
The 30 Volts secondary has a center point allowing for supplying OP-amps ( +/- 12Volts) as well, and at the same time it can provide negative supply, not only for grid bias, but also for constant current sinks as they are often used in differential stages and also in some normal cathode coupled stages.
Remember that with normal capacitor smoothing, the maximum allowable current is only about 67% of the AC RMS current given in the specifications. The Class A push pull amplifier with two EL 84 consumes 80mA. The two secondaries are perfectly capable of supplying two such amplifiers, and if the transformer has adequate cooling the values can be raised at least 15% without any danger.
This transformer is the ideal choice for small amplifiers, single ended or push-pull and of course for almost any type of preamplifiers as the magnetic stray field is extremely small if the two coils are loaded equally.”